Six Seven big titles revealed thus far at E3 2017. Below is our roundup and impressions minus the hype. 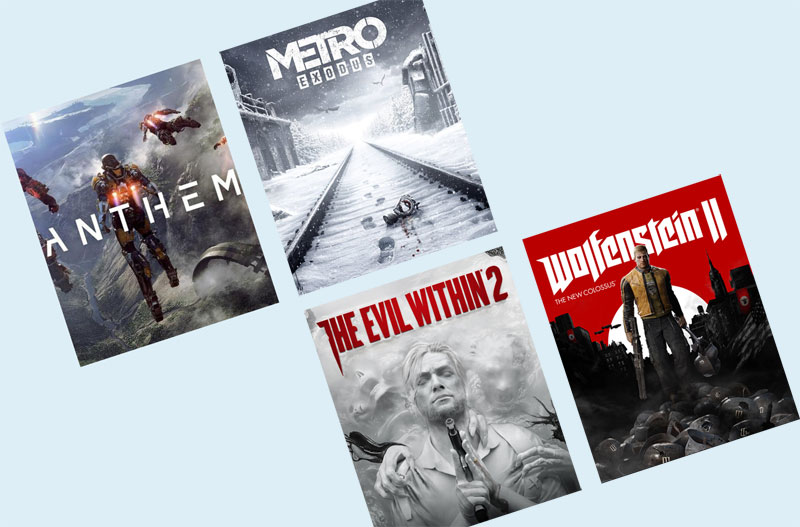 Didn’t bother looking at coverage of E3? Here’s a super duper quick roundup of the thus-far-announced big titles you should keep your eyes on our impressions. Note: we are not professional video game critics and are simply gamers like you. The notes below are just quick spurt of thoughts as the title reveals came in and with as little hype embedded as possible.

This post covers newly revealed “big” titles (aka Triple-As) and on games NOT previously revealed - so no tidbits on Shadow of War or what looks to be an excellent continuation of Life is Strange series. We'll add more to the list if as E3 chugs on.

Update 6/12: Added Beyond Good and Evil 2 on Monday night.

Co-op MMO-style adventure game. Trailer screams Destiny playstyle. Graphics via Frostbite engine are of course amazing. If you ever wanted to fly around in an Ironman suit doing a co-op third-person shooter with your pals, this may be it. Flashbacks to E3 The Division with fake player chat (please someone come up with a better concept already) and scripted scenes. Mass Effect Andromeda died for this and it'll be interesting to see if RPG-focused BioWare can pull out a loot-based co-op MMO-style game.

Hey, Assassin's Creed is back again and this time it is in an Egyptian-like setting. Alpha gameplay reveals bird with drone-like views (that seems too OP?), combat and gameplay hasn't appeared to change much and is still very much Assassin's Creed. The wide array of locations and settings shown looks appealing and gets a thumbs up from us, but we're to be honest we're not expecting much from this title just based on Ubisoft's track record of late. Here's hoping the brief hiatus brings something new and interesting to the long-running series.

Beyond Good and Evil 2

It's definitely not E3 unless we have a surprise or two. This is one of that classic, heavily acclaimed title that you may not have picked up - simply because it didn't sell like gangbuster.So don't fret if you're not sharing in the nostaglia and excitement that many gamers are feeling as the reveal occured. Beyond Good and Evil 2 is a prequel, so if you were hoping to resolve the cliffhanger issues from the first game, no dice for you.

If you haven't played the series, the CGI reveal trailer showed an irreverent tone that may be a bit on the mature side compare to the first title (but then again 2003 is a long time ago). With vibes of 5th Element within the trailer set into an interesting cast of characters and world - we're pretty sure fans of the series are furiously crossing their fingers, hoping that Ubisoft won't screw this one up.

Honestly not much to say from announcement trailer. It’s Evil Within and its back again. If you enjoyed the first game, you probably won’t be disappointed here. If you never bother because you’re not a fan of the action survival horror genre - we doubt this will make its way onto your radar. The game presumably will shift in scope similar to the 1st installment. Survival stealth style game which evolves into survival horror with the right balance of “just enough” ammo so the action elements are still there.

The first game along with its Season Pass is usually on sale for around $7, with the latter clocking in at about $5 on the PC. If you spot it for this price range or lower, you're getting a good deal and they are a worthwhile pickup for fans of the genre.

I mean, if you’re a Guilty Gear Xrd fan this is what you’ve been waiting for in a Dragon Ball Z fighting game. All the modern graphics and gameplay elements that you’d expect. A leaked gameplay video from awhile back essentially showcased much of the action. Proper modern graphics but still very much a 2D fighting game. Seems like a win/win for fans of the genre.

The excellent FPS survival horror series is back and this time in an open-world setting (of course). One of the highlights thus far in E3 for us. The trailer reveals mask-off gameplay outside (yay), dynamic environments and possible wide array of locations to explore and monsters to run away from. Looking forward to seeing more being revealed as development progresses.

If you've never tried the series, the Metro Redux bundle is often on sale at around $5 to $7, with a historic low of $4.74. We highly recommend it as an addition to your Steam library, even if you don't complete either title.

Everybody appears to be waiting for Elder Scrolls 6 but what we got instead is Wolfenstein II, which isn't exactly a bad announcement in its place. Settings of the US in the 60s seems spot on as a continuation of the series. Any Wolfenstein New World & Old Blood fans should be extra pleased with both what's shown in the reveal trailer + gameplay stream.

Both of the previous titles are often on sale for around $8 on the PC (with a historic low of about $4~$5), so if you're interested you should pick those two up whenever they float to those price range again before you pick up Wolfenstein II.

Which Titles Are You Excited About?

There are plenty more being discussed during E3 thus far which didn't make the list above due to the "big and newly revealed" criteria we set. If we missed something under this umbrella, let us know and we'll add our thoughts.

Other noteworthy titles in our opinion include Mount & Blade II: Bannerlord, Total War: Warhammer II, XCOM 2: War of the Chosen, Dishonored 2: Death of the Outsider.

Let us know which titles are on your mind and why you're looking forward to them.