Will you be pre-ordering Civilization VI? If not, join us in our rant. If yes, tell us why we're being stupid. 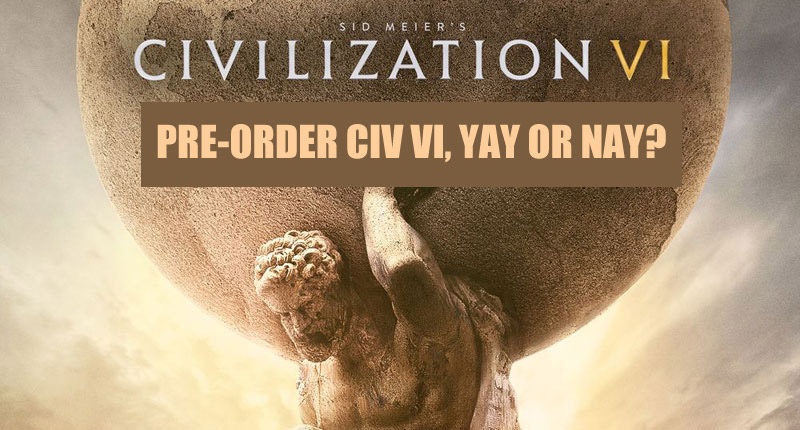 Without prior fanfare, Civilization VI was announced in a trailer last week from Firaxis Games. The trailer was neat and has all the right (and typical) Civilization feel - but in terms of reaction and feel after watching the announcement? To put it shortly, I'm simply just underwhelmed.

In fact, after pondering on things a bit I'm probably going to wait a good while, maybe even long after release (gasp) before I pick up the game. That is, if I can ward off the eventual hype that surrounds the game.

This is Actually Not a Pre-Order Debate

Before we get too deep into this rant, please note that this isn't a debate on pre-ordering a game. While the popular opinion these days is that pre-order is the-worst-thing-ever, the fact is a significant amount of gamers STILL pre-order video games (for a number of reasons). And before you dismiss the pre-order group completely, people that pre-order a specific title are USUALLY the game's most enthusiastic follower/supporter (duh).

The people pre-ordering a game are not exactly going around tossing money at every Triple-A pre-orders out there. From what we've seen on our end, gamers usually pre-order one, or at max two titles, per every few years from the franchise that they enjoy and love (duh x2).

You're probably not going to find many people brand new to turn-base-strategy picking up a pre-order copy of Civilization VI. The gamers pre-ordering are long time Civilization and Firaxis Games fans. And if they don't pre-order, they're going to be picking the game up near Day-1. So while pre-order trend in the industry has many negative issues, this post isn't specifically discussing that.

Lingering Disappointment with Beyond Earth

So, as a supposedly huge Civilization fan, why am I thinking of waiting on Civilization VI? To put it midly, I was grossly hyped and grossly disappointed with Civilization: Beyond Earth.

Certain publishers may not believe in this - but gamers actually do CARE when you make a poor impression on them in their favorite series. (When you think about it, it's kind of a wonder theat the Assassin's Creed series carried on as long as it had).

When Civ:BE's unexpected trailer came out two years ago, I was incredibly excited. Vision of Alpha Centauri nostalgia floated into my head after watching the trailer. Hours upon hours of entertainment. Just one more turn until the sun rises.

If you're a Civ fan, you know how it is.

But when Civ: BE was eventually released? It came out feeling lightweight and simply didn't meet my expectations. The common complaint from Civilization fans is that the game felt like Civ V with a space skin minus features. (Yep it had way too many missing Civ game mechanics).

I've read that Rising Tide has addressed many of these issues, and to be sure a lot of Civ titles are only made much better after the mechanics and depth are improved upon by expansions and DLCs - but I never felt that much "meh" when I loaded up vanilla Civilization IV or Civilization V. Yes, the now available Complete editions of prior Civ installments are excellent, but both games stood on its own legs without the full need of expansions.

The fact of the matter is, Civ: BE was just not as fun as I'd hope. I took a look at my Steam library and I've clocked ONLY 21 hours into the game. In the Civ world - that's basically nothing.

Don't Rely on DLC to Make a Complete Game, Please 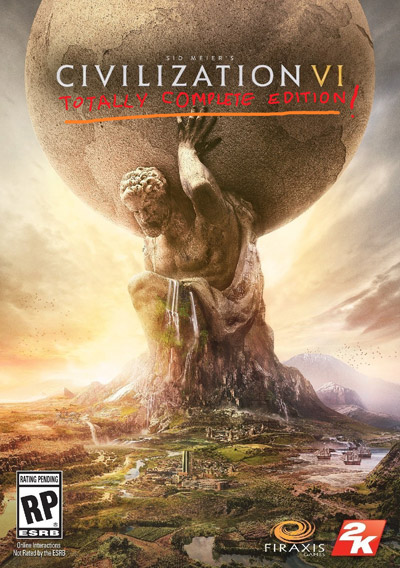 The fact of the matter is, I don't want a $60 game to feel like it needs a "Complete Edition" to fulfill my every wish and desire. While Civ:BE was NOT a $60 game (it was $50 on the PC), this still doesn't excuse the lack of depth from the game.

With the GMG pre-order discount at the time, I was able to grab the game for about $35 after GMG credit somehow stacked - but looking back at it now, even if the list price was at $40 - I'd still feel hard-pressed to feel my money was well spent.

At the current price range of around $13~$15, Civ:BE is a better buy, but you'll probably still need the $8~$10 Rising Tide to make it feel like more of a complete game.

In all honesty, I actually don't mind DLCs all that much. While I don't recall ever buying a particular DLC through the years (except for expansions, which I consider to be a different beast), it is understandable that this is the current state of the gaming industry.

Some people want more content (even if it's cosmetic in nature), and they're willing to pay for it. That's OKAY. I get it. It's not for me, but I certainly get it. Similarly, some people enjoy picking up Collector's Edition of their favorite franchise, but again- I just want the game.

If Civilization VI ends up requiring additional expansion to have a complete feel- it would be an understatement to say that I'll be disappointed.

Will You Pre-Order Civilization VI?

Here's the funny (and bad part), even if Civilization VI ends being a big disappointment on launch (by having thin content and mechanics), it most likely won't deter me away from the series. It'll take more than a bad title (or two) to swear away the years of enjoyment and goodwill that I've built up towards the Civilization series.

I don't believe Firaxis is counting on this type of goodwill when they develop their games (in that they'll ship a bad product simply because people will gobble it up). I think despite the cynicism gamers may feel toward the game industry, at the end of it all - a good number of developers simply want to produce a fun and exciting title - because the core of it, they are gamers too.

While I'm keeping my expectations in check this time around, I'm hopeful Civilization VI will deliver hundreds of hours of enjoyment for Civilization fans like me.

Are you hopeful too? Will you be pre-ordering Civilization VI or be playing on Day 1? Or will you wait patiently for the reviews, Let's Play, and streams before you hand over your hard-earned dollars?