Is Steam's Summer Sale Getting Boring? Here's Why.

"This year's Steam Summer Sale is so disappointing!" -- "This Steam Sale sucks! There's nothing to buy!" Sounds familiar? You might not be alone. Are Steam's Summer (and other seasonal) Sales getting boring? We're tossing out our unsolicitated two cents. 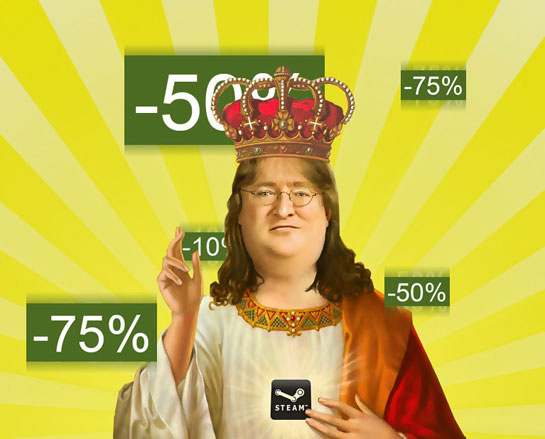 If you didn't know, Steam's Summer Sale will start this week on June 23 at 10AM Pacific. This detail was leaked yet again by our pals at PayPal (whom has had a tendency on leaking the start date through a Steam payment or promotion related portal page). Although this is a completely unscientific observation, it feels as if excitement for this year's Steam Summer Sale is quite lacking when compraed to years past.

While every year select group of gamers are always proclaiming "Steam Sale is sooo boring!" (Exhibit A below) or another popular mantra "This Steam Sale is soo disappointing!" - we think there are some credence to this feeling as we feel the annual/seasonal Steam sale has slowly gone stale through the years. 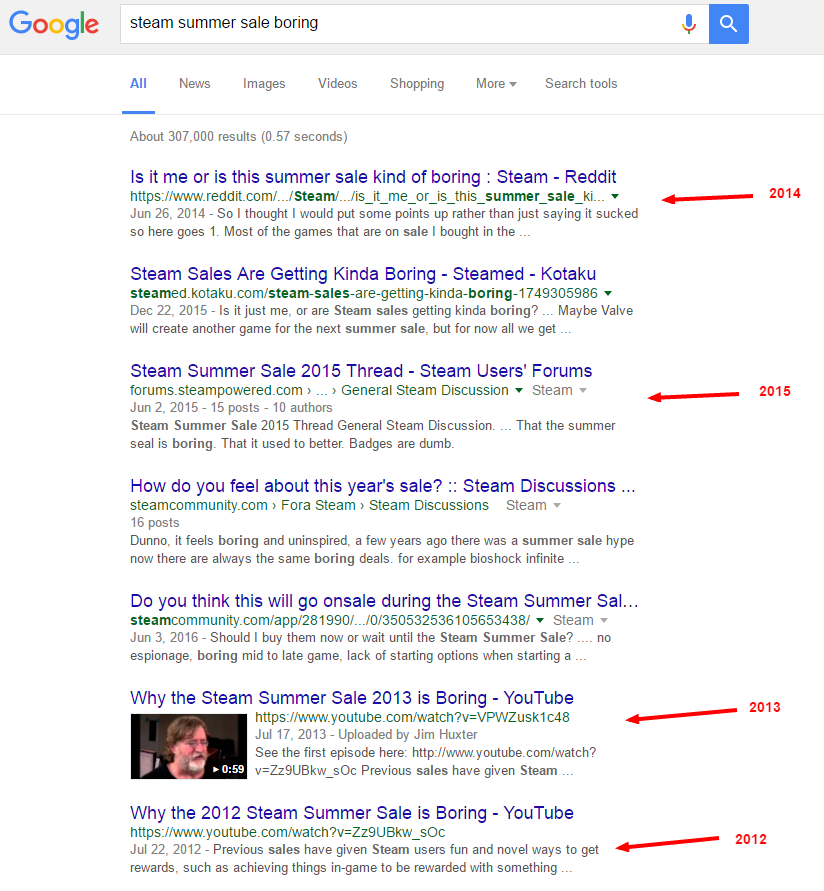 Every year, someone will be complaining about how Steam sale sucks.

Here are some major factors on why Steam Sale may seem more boring to you (and the rest of us) as of late:

1) Lack of flash and daily deals in Steam Sales

When Valve announced last year that they will not be running daily and flash sale during last year's Autumn and Winter Sale, reaction from gamers were mixed. Some were happy that they didn't have to check in daily (or every 8 hours) for that ONE game they really wanted; whereas others felt that the anticipation of new batches of daily/flash sales were key parts of making Steam sales exciting.

While we personally were glad that we didn't have to dedicate as much resources into tracking a Steam sales through its entire week-long (or longer) event, on our end we definitely saw the lack of build-up and interest from gamers who enjoy a good deal.

The old mantra at the time, particularly for those uninitiated with Steam sale was that you should never buy a game until it has been cycled into a flash sale, daily sale, or community pick. With one stroke, Valve did away with this "tradition" and made the entire sales promotion less of an "event."

While Valve didn't explicitly state it during their announcement last year, it was clear among most gamers that Steam's newly introduced refund policy were a clear factor in the removal of the daily and flash sales.

After all, you can safely buy a title and request for a refund if a price is reduced momentarily. Many speculate that Steam wouldn't be able to cope with the request flow base on their current return policy system and we tend to agree. With Steam's already infmous dismal and lackluster customer service, mixing in the daily/flash sale with a newly introduced refund policy is just a recipe for disaster in fulfillment.

In their announcement last year to publisher and developers, Valve noted clearly that if developers couldn't receive approval for their best discount on a new release for the full length of the sale, they can "work on a plan for that game" while still also stating that "vast majority of your catalog should be running its best discount for the duration of the sale."

In layman's term, this is Valve letting developer knows that if they run a discount during the Steam sales event, it should be their "best" available discount for the entire sales period.

Problem is, many publishers aren't willing to do a heavy duty discount for any period longer than 48 hours. In our experience, most publisher are only willing to do limited time deals on their brand new Triple-A releases (which are usually the main draw for the sales event).

Take Bethesda's upcoming Dishonored 2 for example. The title will release on November 11 and it will no doubt be on sale in one form or another during Steam's Winter Sale later this year. While previously you can somewhat expect Bethesda to discount the title by 25% for 48 hours (a reasonable max discount a month after release) - can you also expect Bethesda discounting Dishonored 2 for 25% off (or more) for an entire week? Or a 10-day long sales period?

So while Valve has told publishing partners that they should present the best possible deals during the entire sale period - publishers have less incentive to do so. After all, how would gamers that purchase a recent title feel if they see how quickly the game diminished in value? It's easier to ignore a momentarily flash sale promotion - but its a lot more difficult to ignore a week-long, non-holiday related sales event.

4) Competition is now much more in abundance

If you're a regular Dealzon user, you'll know this well enough. Compared to years ago, there are now plenty more retailers to choose from to pick up legitimate digital copies of a game. It's a consumer paradise when the choices are plenty.

But this also means you're more likely to see the same sale repeated ad infinitum - after all, if a publisher is running a sales promotion on their catalog at one outlet, they will certainly spread it among their other authorized distributors. So if you're seeing a 2K catalog sale on Green Man Gaming in one week, you'll probably see it surfacing again the following week at GamersGate, Humble Store, or elsewhere. By the time you see it on Steam Store, it may already be the Nth time in recent months where you've seen the title discounted at 75% or more.

Not quite exciting at all.

Speaking of Humble Store, the rise of gaming bundle digital retailers is also making a significant dent into Steam's sales event. While Steam Store is still the de facto go-to store for gamers (and we have no doubt they still command a heavy market share), these days you can easily find prices significantly better than Steam at Green Man Gaming, Games Planet, Indie Gala, Bundle Stars, Humble Store, and many more retailers.

In fact, we're fairly certain savvy deal hunting gamers are acquiring more than 80% of new games in their Steam catalog at retailers other than Steam Store.

The common 1st world problem for gamers these days? Adding a game to the shopping basket only to realize they already own the game (tucked neatly in their mile-long backlog).

What Should Valve Do to Make Steam Sales More Exciting?

In our opinion, a return of daily deals at the minimum will be necessary. Valve should (and could) adjust their refund policy to either place more limit on refund for sales title, particularly those of limited-time nature. Giving publishers the flexibility in pricing their sales duration will allow for more competitive (and exciting deals) on both the entire catalog and current new hot flavors. If a publisher can use the Steam sale to aggressively discount their latest title for a limited time period, they will be able to draw attention to their flagship title without cannibalizing revenue for the month (or negatively impacting other distributing partners significantly).

Beyond giving publishers more power to aggressively discount, daily deals will simply provide gamers much more reason to return the next day and discover new titles that they may never have heard of before - it gives people more time to digest a sale, one day at a time - versus having a big lump all handed out at once.

Do you agree with some of the reasons we've listed above? Do you think daily or flash sale are crucial missing features from Steam's Sale? Let us know whether you think Steam Sales are getting stale, and what Valve can do to make things more exciting again.