Editor's Note: Middle-earth: Shadow of Mordor was one of those titles we couldn't wrap our head around when first announced. Is it just another crappy money-grab title for a popular franchise? We even joked about how it failed in that mission by not including "Lord of the Rings" in the game's title. Since released last week, Shadow of Mordor has won raved review and has been one of the top 10 selling titles on Dealzon in 2014.

The following is a review by Dealzon user Brian Walker. Unlike most reviews online, we purchased our own copy and came release date, provided Brian with a copy for him to play through --- just like any other regular gamers. We hope you find this review helpful in getting a better idea of this now popular title. 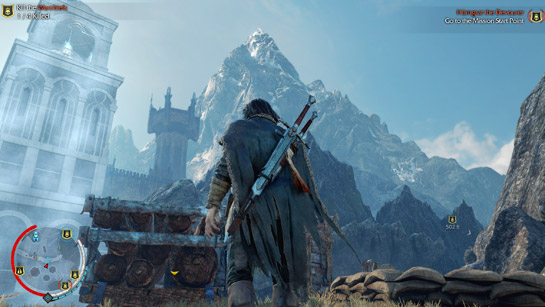 Do you like mercilessly slaughtering Orcs and Uruk-Hai through various means? Yeah, I figured as much. Middle-earth: Shadow of Mordor just might be for you!

Story of Shadow of Mordor

Our hero is Talion, a Ranger Captain of Gondor. After a horrible incident, he is quite literally caught between life and death, possessed by Celebrimbor, a former Elf Jewelsmith now-turned Wraith searching for answers. Driven by revenge and a thirst for knowledge, the two must work together to accomplish their goals. Together, the two have immense strength despite somewhat conflicting personalities.

Their stories are fairly good, and with the help of some well-contrasted characters and intriguing dialogue, the game makes for quite an enjoyable experience. Performances from characters like Gollum really help the game feel cinematic, and references to characters like Morgoth and Saruman bring in ever-important lore. Neither starring character is particularly easy to relate to, but they make you crave advancement nonetheless. 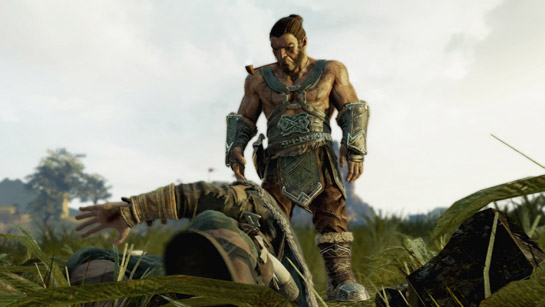 Side-Missions in Shadow of Mordor

Beyond the story, there are a multitude of things to do all over the brutal and ominous fields of Mordor - all of which result in some kind of gain. This game doesn't have the traditional leveling system you find in most RPGs. It's replaced by a combination of alternatives.

The first is Power. Ranking up your Power grants access to higher tiers of abilities. Next are Ability Points, which - you guessed it - let you unlock abilities! These are gained through XP, or Experience Points. Both are extremely important in this game. You'll find it nearly impossible to zip through the story without going out of your way to gain a great deal of both XP and Power. Both are easy to find, but it's typically a grind to obtain them in mass quantities.

As the game's currency, Mirian is equally as important. It's the only way you can increase your health, focus, and amount of elf-shot (arrows, for us plebeians). It's found all over, but you'll need a ton to max out your stats.

The game may be structured around the story, but it's easy to tell the developers really want you to engage in the non-story components. Completing challenges and finding artifacts and symbols are just a couple of fun tasks that are available. For those of you who drool over 100% completion, this game tracks every progression down to the tenth of a percent.

Combat in Shadow of Mordor

Possibly the most satisfying portion of this game, you feel overpowered as you go about impaling and decapitating Orcs and Uruks by the dozen. Talion is readily equipped with three distinct weapons: his sword, his bow, and his dagger (which is really a broken sword). 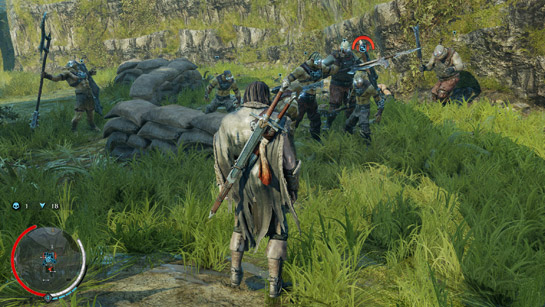 Direct sword combat is very reminiscent of the Batman: Arkham series, while stealth with your "dagger" will make you feel like you're in an Assassin's Creed game.  In the beginning, melee fighting is a lot of mashing left-click, or X, if you prefer a controller as I did. I found the keyboard and mouse duo a bit too confusing and clunky for this particular combat style. As you progress and unlock abilities, battles get much more complicated - and more fun, if you're the strategic type. Timing specific abilities and executions correctly makes you feel all-powerful. 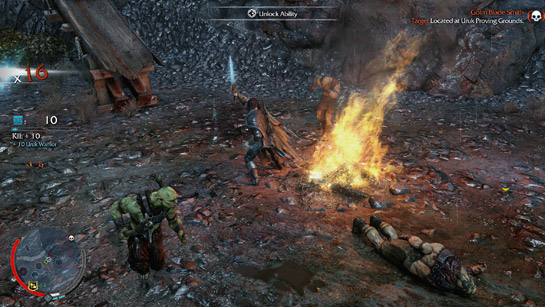 For ranged combat, you're graced with a Wraith-like Elven bow, courtesy of Celebrimbor. When used, time begins to slow as the bow expends your Focus, making it easier to power-up and place shots. Much like using your sword, this is very satisfying. If you're not careful, it's easy to run out of Elf-Shot. Fortunately, it can typically be replenished around the battlefield...but might not be safe to get, depending on the situation.

Rushing into serious fights as well as trying to end them quickly are by far the worst ways to do battle. Throughout much of the game, you're going to find yourself in one of the many enemy Strongholds.

If one of the enemies spots you and the alarm is raised, you will likely have to re-evaluate your situation. Fighting a Warchief, several Captains, and seemingly endless Orcs and Uruks all at once is essentially suicide, regardless of how God-like our hero is. Running away (or strategic withdrawal, for those of you with pride) is often the best option if things aren't going your way.

Many of the serious engagements are designed with strategy in mind. If you don't use each of your weapons and abilities at the correct times,  you'll make things much harder for yourself. There was more than one battle against a Warchief that quite literally lasted half an hour for me. Plan accordingly before major encounters, or you'll be in serious Graug dung.

Enemies That Remembers You

There are some interesting things afoot in Shadow of Mordor when it comes to the enemies you fight - the Nemesis system being the key factor. When an enemy kills you, he remembers it. If you wound him and he runs away, he remembers it and might have scars or wounds to prove it. If you run into the same enemy again, he won't hesitate to bash you on your pitiful performance the last time you met or try to talk himself up after running away like a coward.

Aside from this "memorization" element, there's also a chain of command to the enemy structure. Provided there are positions open, random Orcs and Uruks can be promoted to Captain status, granting them more power, as well as followers. Captains can be promoted to Warchiefs as well - the top of the achievable chain.

Bear in mind: regardless of which enemy kills you, they will gain strength, so dying can make things more difficult for you in the long run. The much touted Nemesis system in Middle-earth: Shadow of Mordor is an interesting concept - and it definitely follows through. Enemies can gain strength and resistances - and come back more prepared the next time. It truly is a remarkable and adaptive system.

All Warchiefs and Captains have some sort of strength and weakness chart. This is one of my favorite implementations by far. One enemy might be immune to your sword and bow but can be completely cut down via your dagger in stealth. Another might be invulnerable to all three and only damaged via exploding elements in the area.

The rock, paper, scissor concept forces you to think before taking action. Here are some general tips when facing your foes in Mordor: 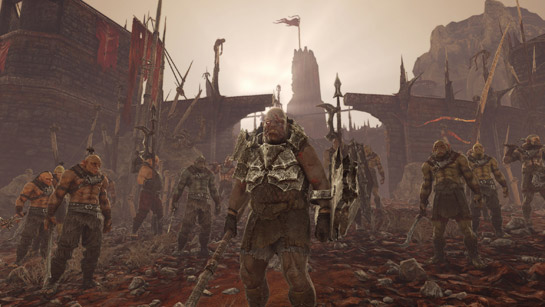 In short, the game is gorgeous. Granted, it's helpful when you're playing on a beautiful 1440p screen at near maximum detail, but regardless of your settings, your eyes will enjoy this game. While not mind-blowing, characters are rendered well, and so are the environments. 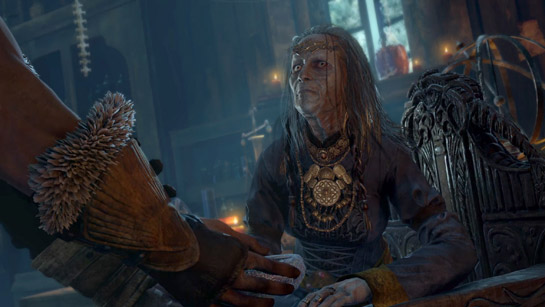 This is reflected by the strain it can put on your system. My Intel Core i7 and NVIDIA GTX 780 3GB were under some stress to be sure, but with everything cranked up to Ultra (save the textures, which were set to high) and in 1440p, the above system managed to keep an average of ~60fps, only dipping to a low of ~45fps in the most intense fights against a screen-full of Orcs.

For the 0.001% of us PC gamers, you can try and separately download the "Ultra texture" pack as it'll require a GPU with at least 6GB of VRAM. For the lucky few, you'll be able to enjoy even more ridiculous texture. My GTX 780 was up against the 3GB wall with high textures, but as mentioned it was more than plenty. 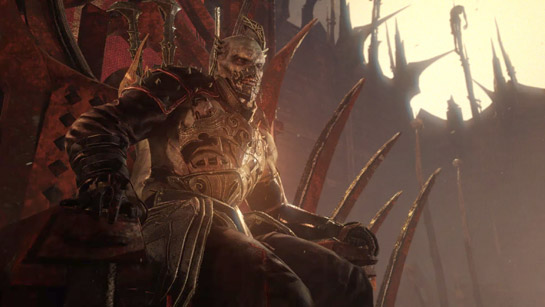 Overall, Shadow of Mordor is a great title coupled with a cliffhanger ending. It's easy to believe there will either be additions to the story via DLC, or a second game. Both are happily welcomed in my eyes. While we don't have a formal review score chart readily available, if you must put a number on the game, Middle-earth: Shadow of Mordor will easily be a 9 out of 10 game. A solid title you won't regret checking out.