It's been a while since I've played a single-player RPG, especially one set in a unique universe like South Park. (Funny how having a 21 month old can get in the way of your gaming life...)

If you're on the fence with South Park: The Stick of Truth, here are some first impressions from my ~2 hours of gameplay last night (I stopped after reaching ~ level 4). Note that this isn't a full-on review, but it should be a helpful perspective in the sea of reviews that are already out on this game.

TL;DR: If you're a fan of the show, the game will be worth the current $45 (best price as of writing). If you're not a fan of the show or a casual fan, wait till it drops below $20, since the game's length and replay-ability will be limited. 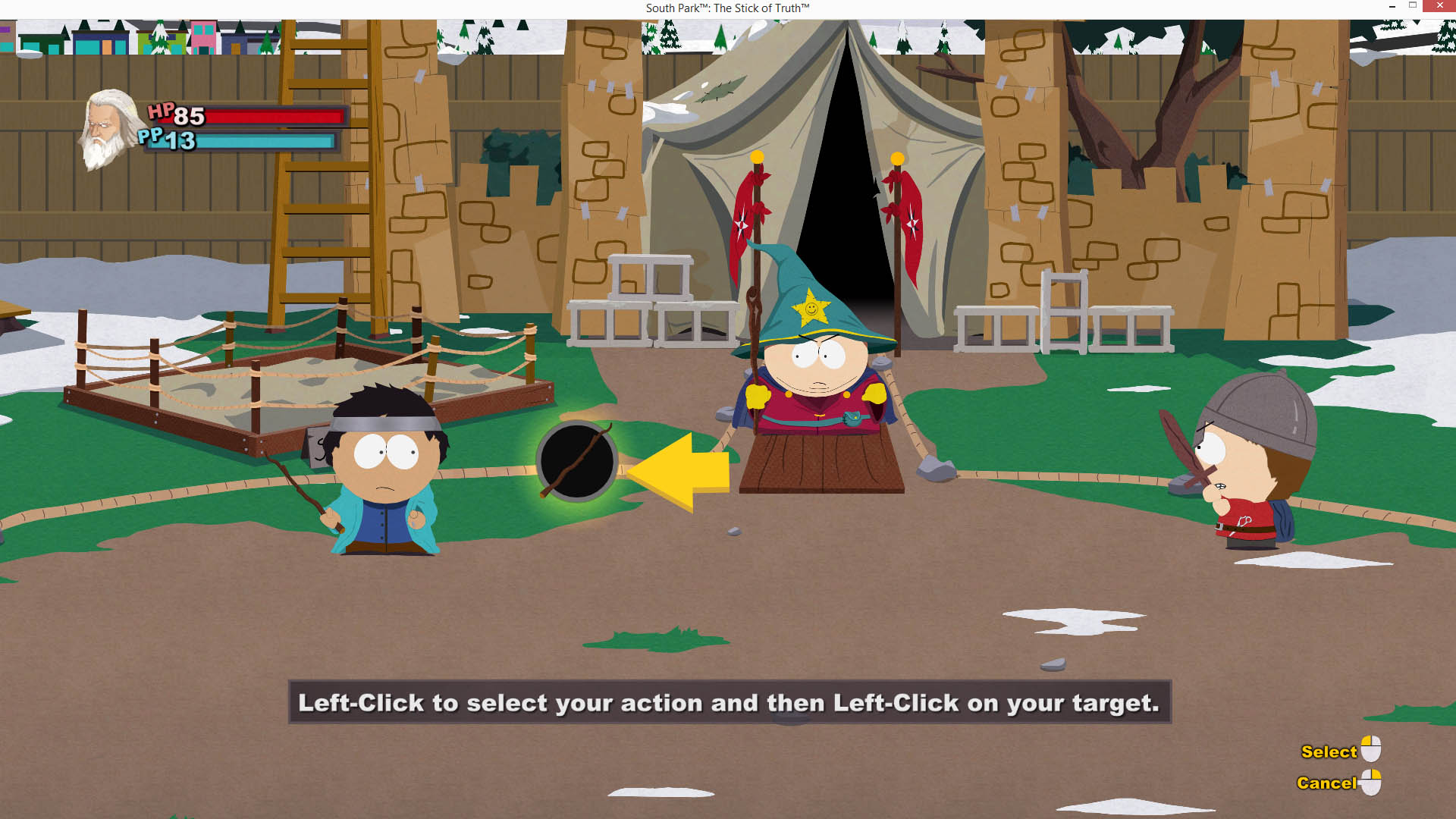 No long tutorial sessions. Your average gamer will be able to pick up gameplay immediately, especially anyone with extensive RPG game experience (though Stick of Truth is tactical RPG-lite in my experience thus far).

After creating your character, you'll soon meet some of the gang, including Cartman, who will pretty much be your mentor in your quest for social acceptance. Cartman will be teaching you various skills you'll utilize through out the game, including but not limited to beating up other elementary kids and unleashing dragon-born worthy @#$%. 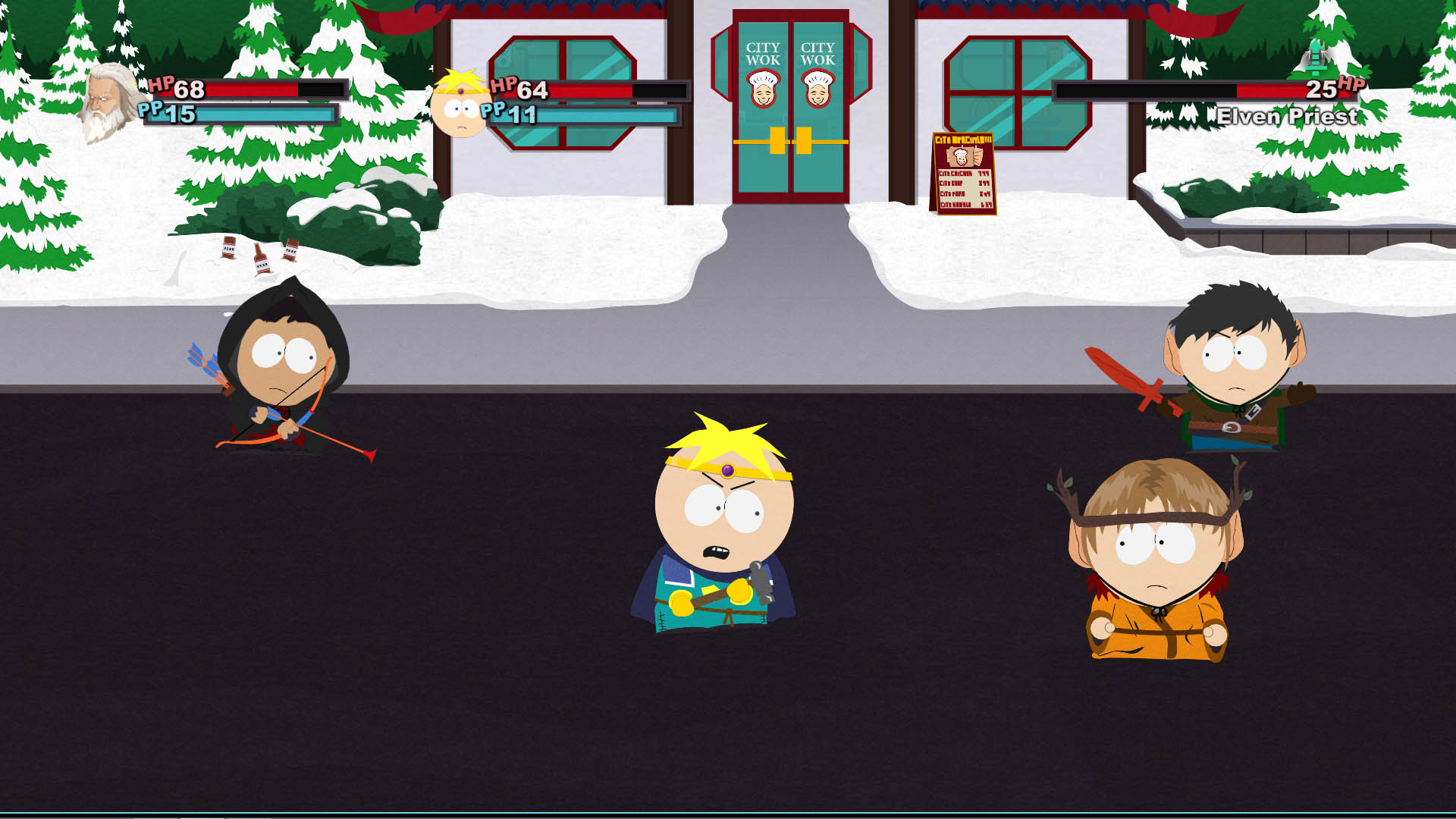 Granted, I've only played the game for about 2 hours, so I haven't progressed too far. But after a mini "boss" fight of sorts with a Hall Monitor, it's pretty evident that as long as you choose the proper attacks, you should sail through the game without trouble.

If enemy puts up X defense, use Y attack. There are probably going to be a few specific class builds that will be OP too, rendering the game incredibly easy. But again, that's an impression from only playing for 2 hours (out of the 10 hours the game's supposed to take). 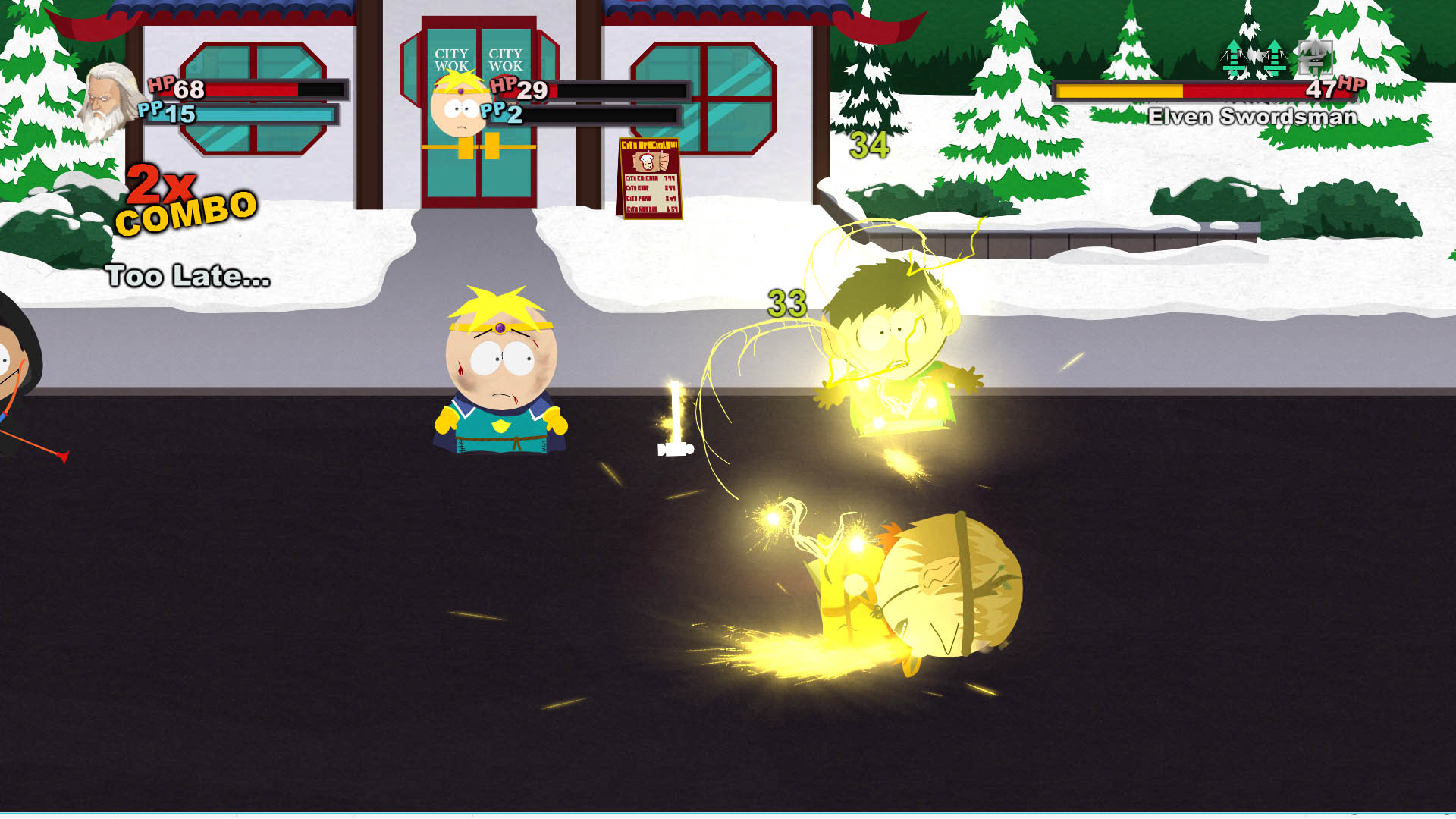 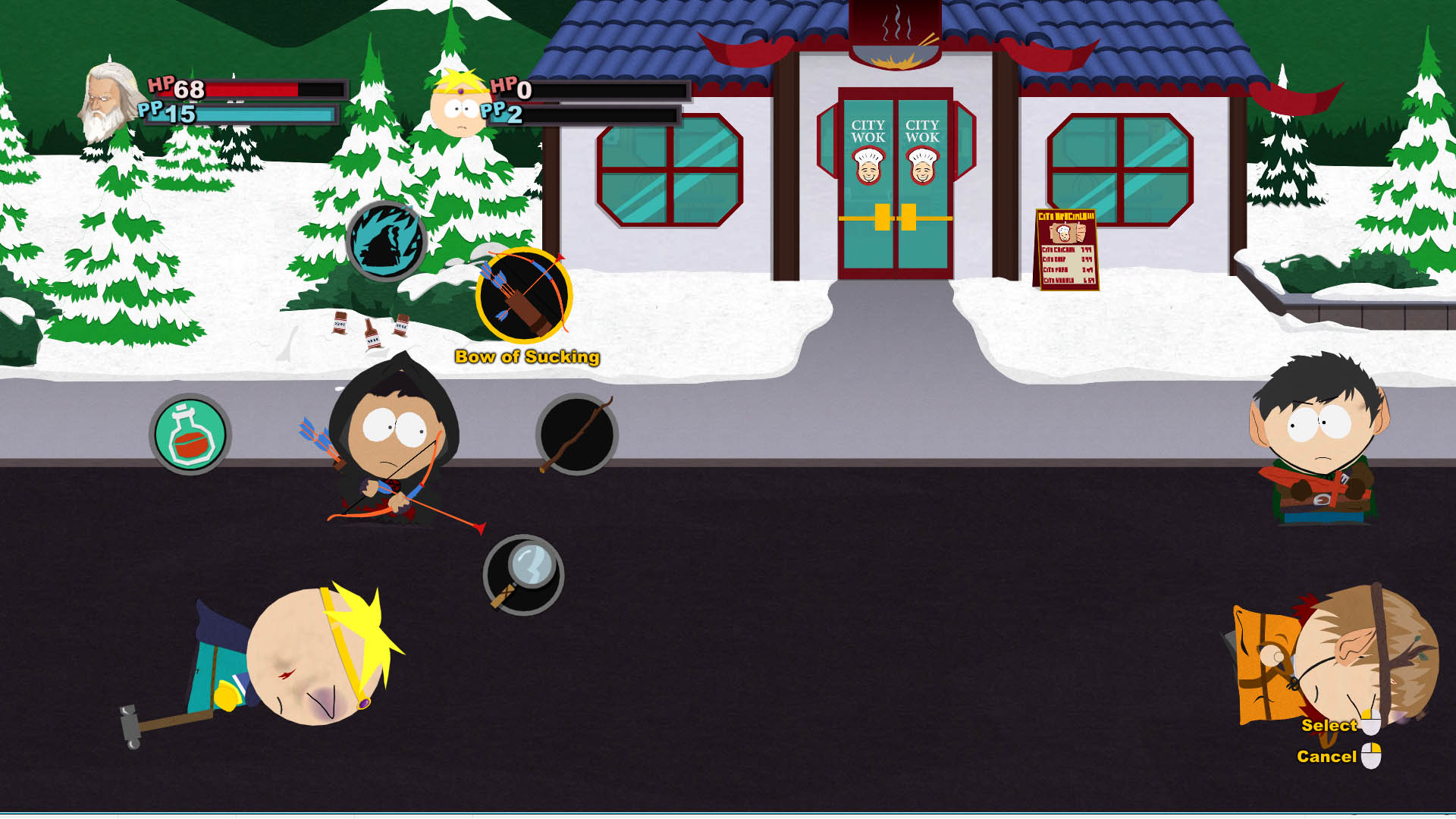 While there are a few instances where your party members might get pwned, there never really was a sense of urgency to make sure your companions stays alive, given companions will automatically revive after a battle is won and your party goes back to full HP (which is a nice plus for frustration and grind free gaming, but again, makes the game slightly less challenging vs typical RPGs).

You'll Get a Kick Out of Meeting All the Characters 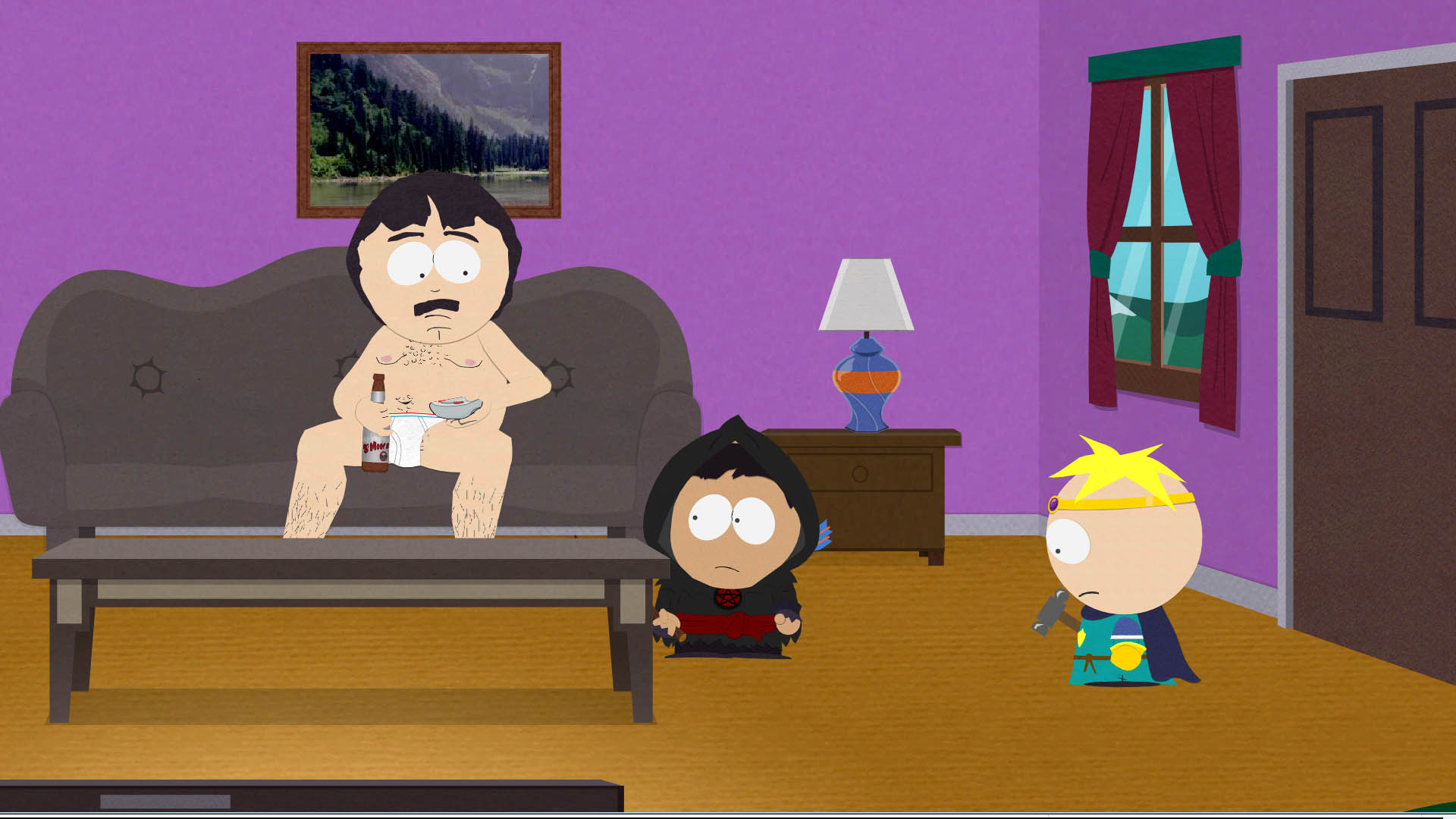 Fans of the series will really, really enjoy the game. I'm a casual South Park fan in that I've watched enough episodes to enjoy Randy's wild behaviors, but I'm far from the usual big-time South Park fan that can reference every quote from every episode.

Having said that, seeing Randy chilling out in his underpants as I open the door to Stan's house has its own charm. Or sifting through Cartman's mom bedroom and finding one too many toys for her promiscuous acts. If you're a fan of the show, you'll really enjoy this interactive South Park universe. The unique and detailed settings along with high production value should easily win fans over.

Stick of Truth is Still Mostly for Fans

There are definitely many instances of inside jokes that simply escaped me because I hadn't seen the particular episode referenced.  If you've watched almost all episodes or count yourself as a serious South Park fan, you'll want to buy this game (and you probably have already).

For the rest of us, especially those that are familiar with the characters but don't necessary live and breath the little Colorado town, you might not get the same level of enjoyment out of the game as a bigger fan would.

Being only 2 hours in, I fully expect references to amp up as the story gets more involved and some of the other main characters get introduced. If you've never watched a lick of a South Park episode, this game may not be for you (or maybe you'll start enjoying its type of humor and check the show out - because its 100% South Park humor).

If you're only a casual fan of the series or lightly aware of the series, but a fan of Obsidian's RPG work, my suggestion is to wait for the price to drop below the 50% point in 3-6 months. If this is a $20 game, I'd easily recommend it to fans of all levels. Right now, you'd have to be a pretty big fan to get the full $45 (or $60)'s worth of enjoyment.

Agreed? Disagree? If you've bought and played the game, feel free to chime in.

While still far from a full-fledged review, I am currently five hours into the game and according to other reviews this is essentially the mid point. New skills from companions such as Butter's transformation to Professor Chaos is hilarious, and its nice that the companion choices have now ballooned to four different characters. Having said that there are a few negatives in the game that have since surfaced. One annoying aspect of The Stick of Truth is the magic (aka passing gas) learning/tutorial sessions. (If you Google/YouTube this you'll find many referneces).

This particular session involves Randy teaching my in-game character a new move, though initially funny it quickly became frustrating because the entire tutorial wasn't intuitive in design. At the end, the "learning" process was also a time waster due to the fact that the actions/steps you take to "learn" the moves won't ever need to be repeated in the game again. So it becomes a pointless exercise in mashing buttons on your keyboard or joystick to just so you can progress from the scripted event.

Beyond this negative, things are definitely more interesting now with the combo of Randy, other worldly visitors and government conspiracies --- all ridiculous in its plot point but all in great tradition of plain South Park fun. While I'm sure that the annoying "magic tutorial" sessions are far from over, the game has thus far stay true to my initial recommendation: perfect for fans, and a "rental" for non-fans. 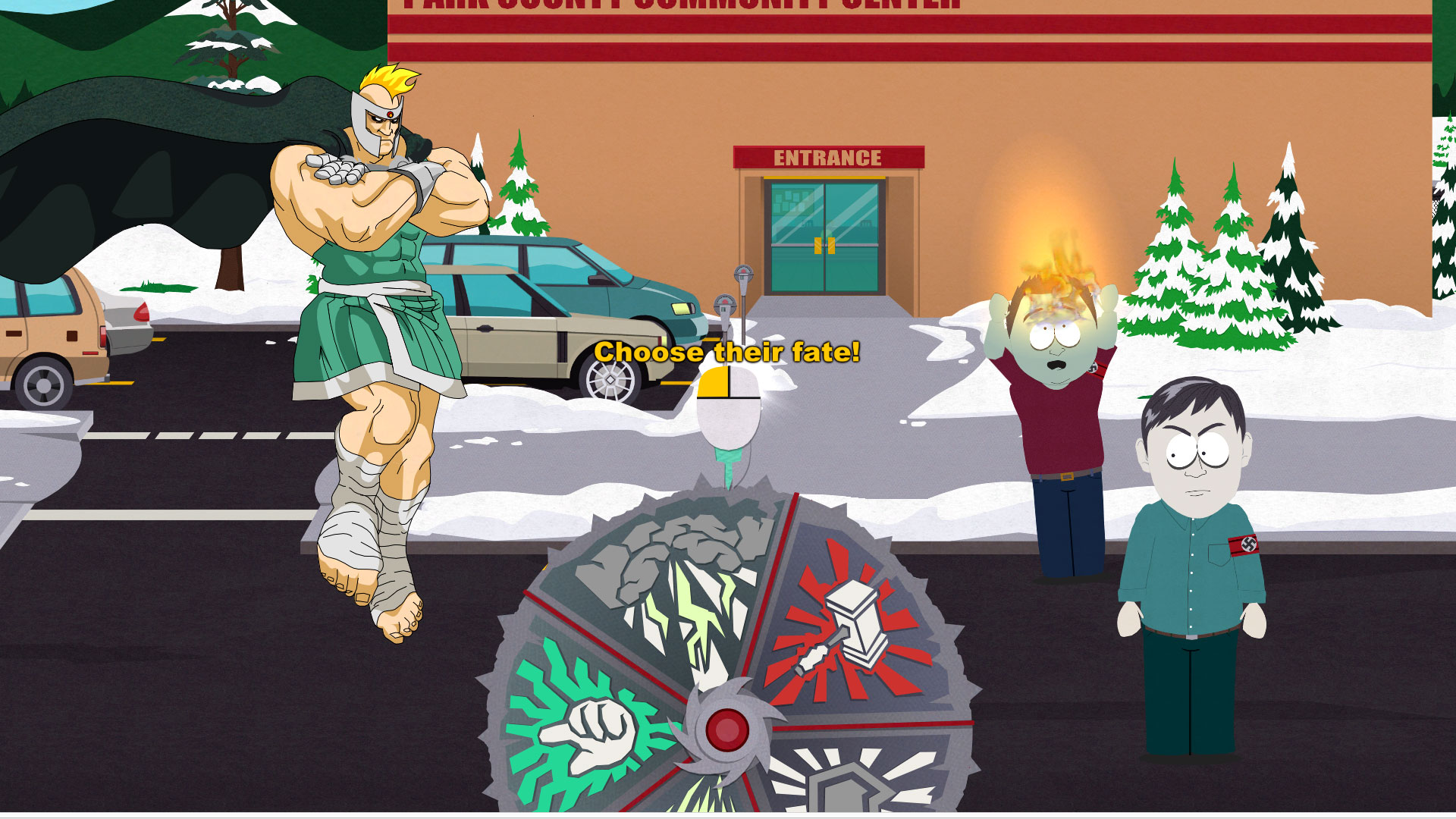