You can't call yourself both a gamer and a Star Wars fan if you pass up on the latest Star Wars Humble Bundle. You get 9 classic LucasArts games for $12, or pay just $1 for 3, and part of your money (or all if you choose) goes to charity. Most people are fairly certain that they'll also be adding other titles such as Dark Forces II, so its a safe bet that beating the average may be well worth it. 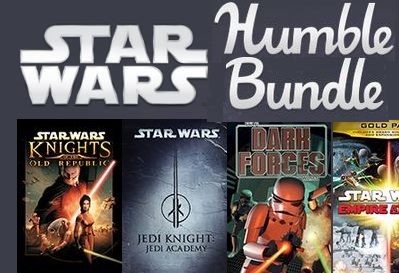 For those that somehow haven't played any of these titles (or select few as they get quite old), we've compiled a list of play order by release date... or if you really want to be a bit more hardcore, by era/story timeline.

The bundle started up yesterday, February 3rd, and has sold well 2 million. Pay more than the average ($11.40 at the time of writing) and you'll get more games when they are added to the bundle on Tuesday, February 10th at 11:00 a.m.

Are there any games on this list you've never played before? Let us know in the comments below.

Funny enough both Viet and I have 90% of the games listed in this bundle, so we're passing on the bundle for now. As last tip for nwecomers to KOTOR II, we highly recommend the restoration mod which will enhance the game by a significant amount.